There you are: the interview is about Brian’s views on FP, OOP, Computer Science…​ 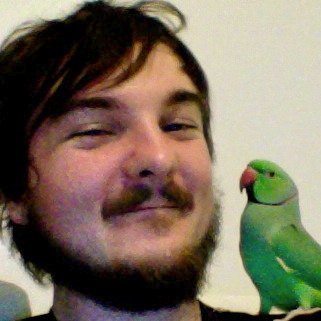 First things first, who are you, Brian? What are you doing? Moreover, is the parrot yours? :-)

I’m Brian McKenna, possibly better known as @puffnfresh. I was previously working at a company called Precog, where we wrote purely functional Scala to make a service for analytics over big data. We were recently acquired by RichRelevance, so now I’m writing Java for product recommendations.

The parrot is my pet Indian Ringneck!

A function (according to mathematics) is something that takes an value and produces a value. That’s it. If it does anything else other than produce a value, then it’s not a function (i.e. it has side- effects).

You have been growing quite a deep interest in this paradigm. Where does this originate from? When did it start?

I started programming with JavaScript, PHP and Python. When I entered a "University for the Real World" I had to do C, C++, C# and Java but that was of course just more of the same old. I really wanted to learn something completely different so I decided to do it myself.

Hacker News kept going on about how crazy Haskell was, so I decided to seriously learn it. Everything about Haskell just made more sense to me. Purity made me write better programs and so did having a great type system.

I later got really interested in concurrency because of Haskell and functional programming, which helped me out with classes in University!

You also seem to enjoy some time exploring new programming languages. Which one(s) would you recommend amongst your latest discoveries and why?

I’m really excited about Ermine, a Haskell-like language with row-polymorphism for the JVM. It was created by Edward Kmett, Runar Bjarnason, Josh Cough and other smart people at Capital IQ for generating reports by non-programmers.

I’m also excited about BODOL, a functional, typed and curried Lisp. Created by Bodil Stokke because it’d be awesome.

I read several tweets of yours similar to this one: "‘You can write bad code in any language' is not a valid defense for Java and node.js - they don’t give you much of a chance to do otherwise."

What bad parts do you attribute to Java as a language, to Java as "represented" by popular frameworks, Java as its Virtual Machine and finally Java as its community? And also, what are the GOOD parts of Java in your opinion?

Java as a language and its users:

I’ve worked in a few companies which write almost solely Java and I see the above all the time.

Do you see any future for functional programming languages on the JVM? Will we be alive to see Haskell fully ported there for instance?

Ermine is doing great things for functional programming on the JVM. It actually makes some small improvements on Haskell but it doesn’t have some of the more basic things, like type-classes.

Frege is a fairly direct port of Haskell. It fixes a few mistakes, for example it has a better generalised standard library (e.g. it doesn’t make the Monad/Applicative mistake and also has Bind/Apply type-classes).

One downside of Frege is that the compiler requires Java 7.  Another downside is that it compiles by generating a huge Java source file and forking to javac. I can get over those minor annoyances.

What is your take on Javascript? Is it only worth as a transpiler target (e.g.: Roy does this)? Can it be called a functional programming language?

I don’t like the label "functional language" - almost all languages allow functional programming (i.e. using functions as actual mathematical functions) so when is a language allowed to have that label?

Functional programming in JavaScript is incredibly hard. I definitely think that compiling to JavaScript is the best thing to do.

Not a new question, but still somewhat confusing: do Computer Science and Software Engineering differ?

I haven’t really thought about this before.

I don’t think writing software is or should strive to be engineering. I guess I’d like it to be purely an application of computer science. Maybe I’m a dreamer, but I’m not the only one!

For the last question, let’s go back in time and imagine you are given the opportunity to discuss with E. W. Dijkstra. What would you talk about?

Dijkstra seemingly did not agree with getting computers to help with proofs. I found that very strange. While I can’t make my computer figure out what I want to prove, it definitely helps me out once I tell it (i.e. by writing down a type) - Dijkstra said he wasn’t comfortable with type theory so maybe that was the only problem. I’d like to find out.